How creative we really are when using our language?

Traditionally language was seen as consisting of a limited set of grammatical rules and a large number of words. Presumably, each time we want to communicate something, we would choose the words, combine them together following the rules and so we would creatively construct a message. In such a way, linguistic ability would allow us to produce an unlimited number of sentences that no one has ever heard before and still be understood.

However, when linguists moved away from researching what speakers could do with their language to researching what speakers actually do when using a language, they came to the conclusion that this is not an accurate picture of how language works. It seems that teasing grammar and vocabulary apart is much more complicated than it would initially seem. It also appears that we are using a lot of pre-constructed, ready-made sequences longer than one word to build our messages. This use of pre-constructed language is not some sort of detrimental choice of clichés or an indication of deteriorating ability of using the language creatively. On the contrary, this is an effective and expected way to communicate messages and to have the best chances of being understood.

Dr Laura Vilkaitė-Lozdienė will briefly present what kind of pre-constructed language sequences we know, how many of them we use in our language and how their usage affects our understanding.

More info and an online link to participate > 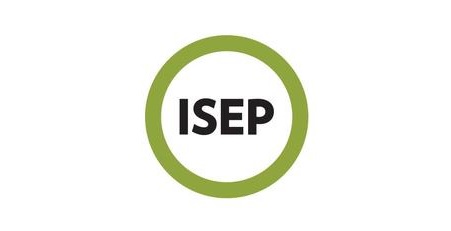 Vilnius University students are invited to participate in the ISEP student exchange programme and spend Fall semester 2021 or the whole Academic year 2021/2022 in one of the Universities in the USA or other country.

To be given access to the workshop, please write to  or by clicking here > 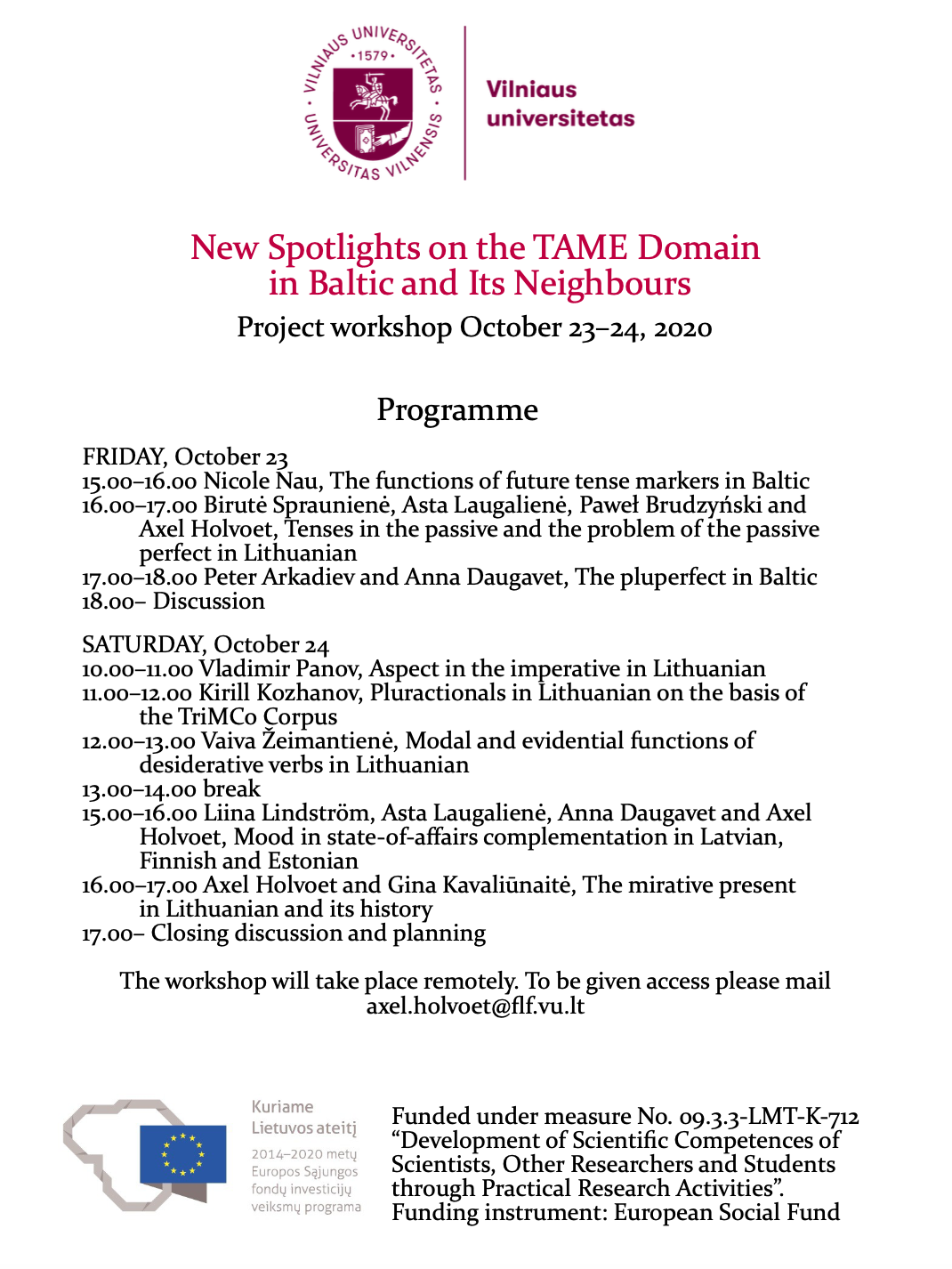 These challenging times have changed our daily life, especially social habbits and freedom to travel. However, we still want to reach important goals and make our dreams come true. We have no doubt that you cannot wait to quench your thirst for travel, knowledge and adventure. International exchange programmes can be a solution.

We are hopeful that the odd swill be in your favor during the upcoming spring and you will have a chance to get an international experience in the university of your choice!

Applications  for the  SPRING semester exchange (AY  2020-2021) are open until the midnight of  the   24th  of September  (bilateral exchange until October 1st  midnight).

ATTENTION!  You can apply for different mobility options at the same time.

Informational session will be held online on the 16th of September (2pm). For more information about the event – follow Vilnius University page (Facebook).

Dear academics, dear students, administrators, emeriti, all members of the community of the Faculty of Philology,

We are about to start our strangest academic year during the last decades of Vilnius University, a year scarred by a pandemic virus. However, the long-lasting history of the University and of the Faculty continues with us working on our tasks and celebrating our festive events. As usual, the first of September is very different to people of different generations: some of us remember our numerous first-of-Septembers when we see school children with flowers in their hands flocking to start their first school year, others are getting ready for their umpteenth meeting with young people who see the world of school, University and books as the most fascinating, still others gaze in awe at academics expecting them to tell the young people the best ways leading to the stars.

I would like to congratulate you all on the occasion of the beginning of a new academic year starting 1st September 2020 and welcome you at the Faculty of Philology, a kingdom of words and texts. You, of all people, are capable of identifying the value and weight of words and texts, and know how to do it better than others. I wish you could use angry words sparingly and be generous with kind words, I wish we could help the world understand that how we speak and write is no less important than what we say and write.

I wish this academic year could be a year of our community, when we could join our efforts not only for our small communities, such as departments, research groups or study programmes. Let us join our efforts for the Faculty, for the University, for Lithuania and the world. I know that we can do it. I would like to take this opportunity and thank you each and every one of you for being with us, for your creativity, for your spirit of camaraderie that you bring to our multilingual community. Your unique personalities are the best signposts on the University’s and the world’s journey to meanings and senses of words and texts.

Dean of the Faculty of Philology 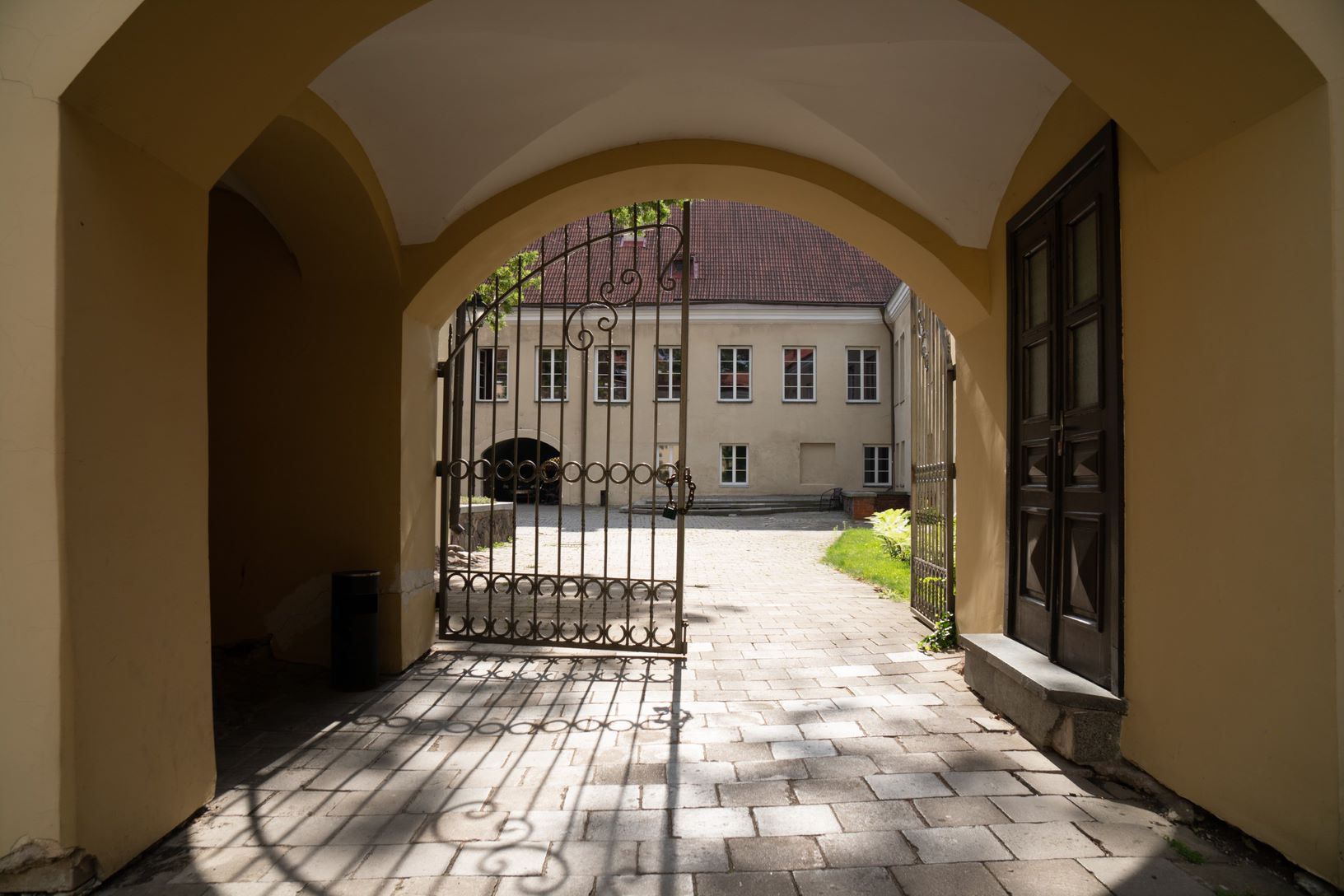 The last seminar in the course „Reading the Anglo-Saxon epic Beowulf“ was special this year: guided by three masters of historical martial arts from the Sword Mastery School (Lith. Kalavijo meistrystės mokykla, leader Andrius Janionis), the students learnt about the early medieval weapons, combat techniques and practiced fighting with sword and buckler.

“Reading the Anglo-Saxon epic Beowulf” was a new elective course offered this semester for the students of both English philology and Scandinavian studies. It was a slow-reading course of the heroic poem, held by many to be the masterpiece of Old English literature.

In the poem, swords play a prominent role in comparison to other weapons, since they are depicted not only as used in battles, but also as precious and mysterious artefacts that carry immense social and cultural significance as symbols of loyalty, power, inheritance and obligation.

The Sword Mastery School in Vilnius founded six years ago by the archaeologist Andrius Janionis aims at reconstructing the tradition of historical martial arts based on the authentic evidence found in written and archaeological sources. The leader of the school together with his colleagues have kindly agreed to teach our students some combat techniques using true to life replicas of medieval swords and shields.

According to Andrius Janionis, the sword is an especially old weapon that has been used in Europe continuously for nearly a thousand years. Although fighting with a sword might seem easy, masters of the art accentuate the precision and thorough knowledge of fighting techniques, which easily allow to compare the sword to using a surgeon’s scalpel.

During the seminar, the instructors from the Sword Mastery School taught the students of “Beowulf” some authentic movements with a sword and a small shield called ‘buckler’. Since no combat manuals survive from the times of the Anglo-Saxon poem, to have a glimpse into the fighting techniques of the early Middle Ages one has to rely on the earliest surviving fechtbuch in Europe, the so-called Walpurgis manuscript from ca 1300. The manual depicts series of defence and offence moves between a master and a pupil each armed with a sword and a buckler. It might be that the medieval fighting tradition of the Anglo-Saxons or Scandinavians was very similar to the one documented in the manuscript.

The most important thing about sword fighting, therefore, is not only the physical strength, but also the invaluable lessons of freedom, concentration, courage and purpose that once learnt in swordplay, will gradually manifest in the students’ everyday life as well.

The Sword Mastery School together with a few other clubs in Lithuania belongs to the international Historical European Martial Arts (HEMA) movement that unites thousands of sword fighting enthusiasts across different countries in Europe. To learn more about HEMA and follow the events organised by different fencing clubs, please check the link iekm.lt/eng/. 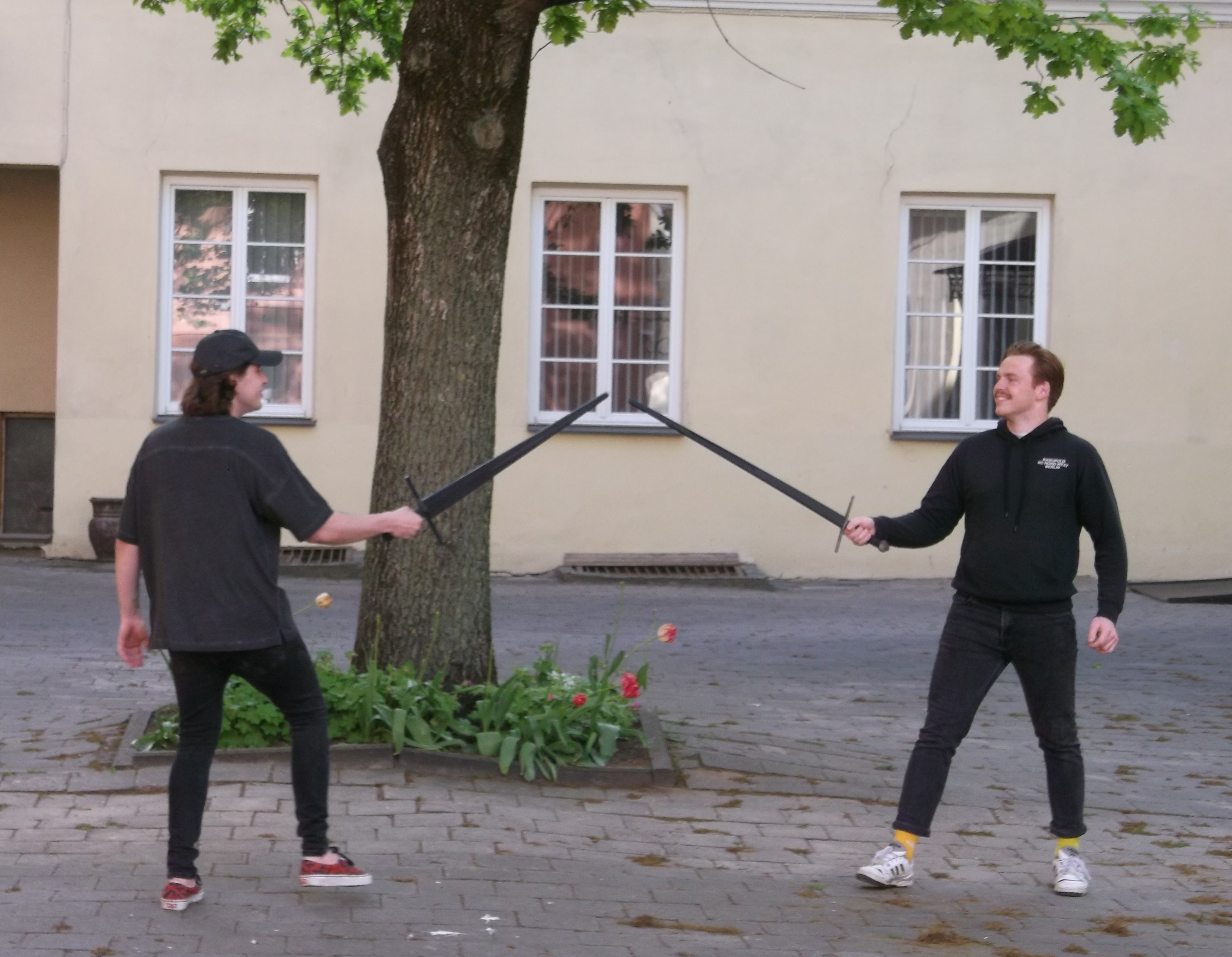 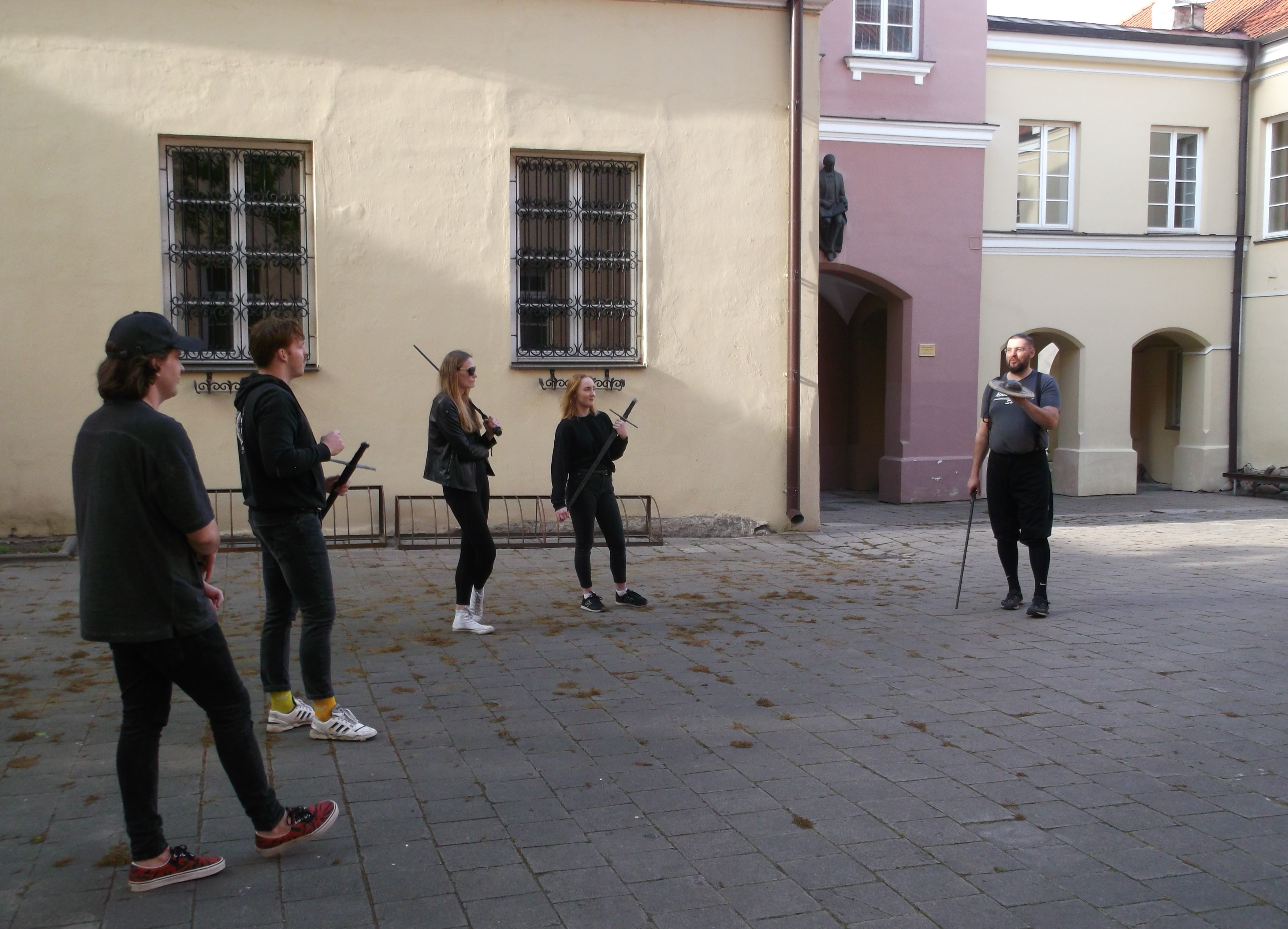 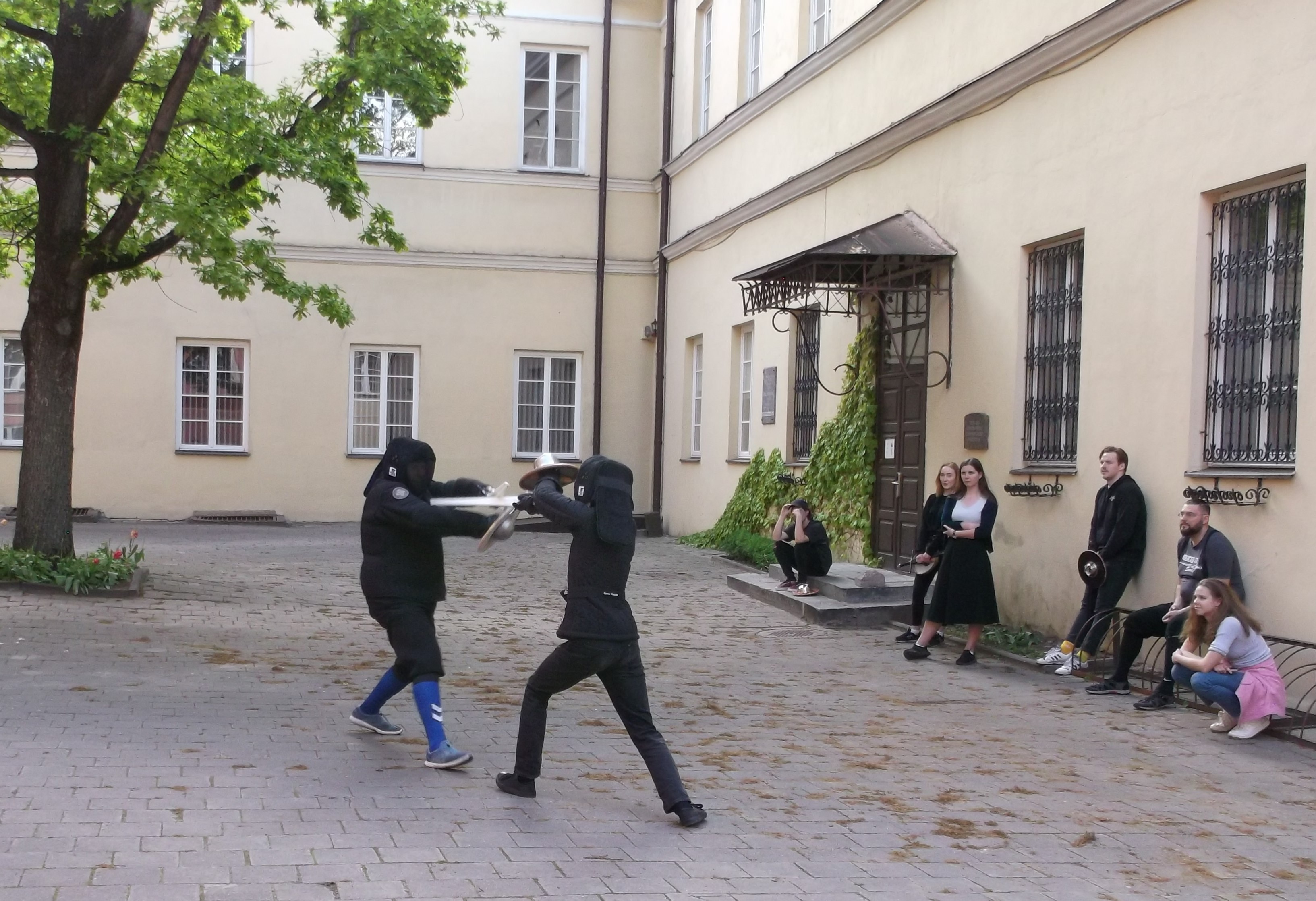 The Department of French Philology of the Faculty of Philology invites to an international conference Le mot dans la langue et dans le discours 3: la construction du sens. The conference will be held April 23–24, 2020. More information can be found below:

On 4 October 2019, the conference "Translation in a modern society: the changing profile of a translator, ethics, expectations" will take place at the Conference Centre (Room 92) of the Faculty of Philology, Universiteto St. 5, Vilnius. The Conference is jointly organised by the Directorate-General for Translation of the European Commission and the Institute for Literary, Cultural and Translation Studies of the Faculty of Philology. There will be video conferencing between Vilnius and Brussels.